10 Reasons My Dog is an Asshole

Bad language warning: This post is full of the foul language that my dog incites.

Poo warning: This post is full of dog poo stories. You've been warned.

My dog, Hunter, is the biggest jerk on planet Earth. Now, I love my dog, if I didn't, he'd be out on his cantankerous ass because he has just grown into the most annoying, inconsiderate douchebag. He's a Miniature Pinscher, and my husband bought him about six months after we started dating. I warned him that minpins are considered an aggressive breed and it would be hard to get an apartment to rent to him with a dog like that, but, as per usual, he paid me no heed and went and bought this little shit from a breeder outside Austin. That was 12 years ago, and he's never been an easy dog, but lately he just doesn't give a flip who he pisses off. So, in recognition of the fact that my dog is just a giant a-hole, I've dedicated this blog just to him. Here are 10 reasons my dog is an asshole. 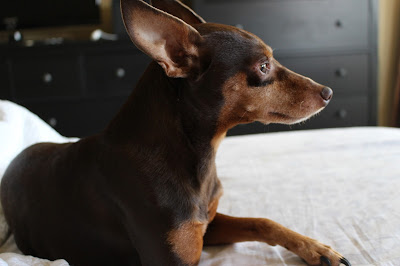 Everyone knows that if you drop food on the floor, unless it's something that's bad for him (just so y'all know, bad food for dogs doesn't end with chocolate. They also shouldn't have raw onions, grapes, raisins, or macadamia nuts) it's his job to eat whatever falls on the floor. He gets really excited about it too, he runs over to you with his little nubbin tail wagging as fast as it can and hunts around for whatever morsel of deliciousness has just fallen into his domain. But he can't find it. Like, ever. I have to help him find it by reaching down and pointing to the doggy delicacy. At that point, I might as well have just picked it up off the floor.


9. He has extended his territory to include meals that are abandoned for the 10 seconds it takes to get up and get a napkin.

When he was a puppy we spent lots of time training him as to what food he could eat and what he couldn't, but now that he's older, Hunter badger don't care. Hunter badger DGAF. If you get up for even the most cursory and brief errand, you'd better take your food with you, or he'll jump up and help himself. Brisket you've been smoking since dawn? Why thank you. Homemade lasagna that took hours to prepare and will give any canine the shits? Don't mind if I do. 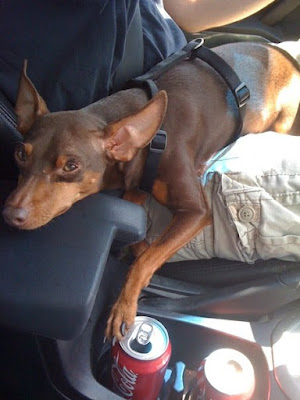 8. He collaborates with my daughter to scheme against me.

Vivienne knows she's not supposed to feed Hunter. Hunter knows he's not supposed to eat people food. So they hide in her closet as she feeds him her lunch. One time this included a chocolate chip granola bar. The next day my husband heard a sickening splat come from the kitchen, and when he walked in to investigate I just heard an emphatic OH NO OH MY GOD coming from the other room. As I ran in in a panic I caught sight of hunter doing his squatting walk in circles around what appeared to be a small lake of doggy diarrhea. My husband (who might be just as evil as my dog) stifled his laughter, lied an apology about needing to leave for work and then escaped, leaving me to wallow in my tears and liquid dog excrement.


7. Now that he is geriatric, the poops are never-ending.

Hunter was crate-trained as a puppy and as an adult dog almost never had accidents. This is no longer true. Now he just straight up poops whenever and wherever it pleases him. I will frequently enter my bedroom to find him lounging on my bed, surrounded by a carpet full of poo and I'm just like, WTF dude, you didn't bark or scratch to get out or anything! Worse than that are the times he not only poops on the floor, but he will walk through his own poop, and then continue to run about the house, leaving little doggy crap-tracks in his wake.

My dog is mean. The only reason he is still alive is that my friends and family have graciously not sued me to compel his removal from this earth when he bit their ankles. Granted, he's tiny and has never done any real damage, but in today's overly litigious society people have been sued for far less. Thank you, loved ones, for allowing this dickhead to live.

5. His bark will split your eardrums.

When anyone comes over, hunter goes absolutely ballistic. He starts bouncing off the walls at a million miles per hour and screeching like a hell monster who has somehow escaped oblivion only to torment those of us still walking the earth. Oh, he also does this if a text message goes off, or if a phone rings, or if the television makes a high-pitched tone of any sort. Straight to the front door he runs doing his weird protective run/hop to massacre the ankles of any uninvited (or invited) guests who might be lurking about our property.


4. He will just wake anyone up whenever he feels like it.

Since I've been working from home while simultaneously being a stay at home mom, Vivienne's snack time frequently takes place in her room, far removed from mommy and her laptop. Because of this, we end up with pretzels and Ritz crackers in the oddest of places, like shoved inside someone's underwear drawer, or stacked on top of a pile of books, or smashed into crumbs in a barbie purse. Hunter knows this and takes intermittent scouting trips to find these little gems. His favorite time to do this is about 45 minutes into Vivi's nap. He goes and bats open the door, jumps up on the bed where she's sleeping, walks all over her and noses her around looking for spare goldfish. As you can imagine, this makes Vivi mad, which makes mommy mad. 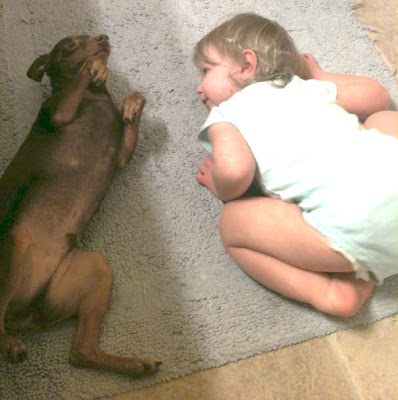 3. His pee could dissolve bedrock.

If it's raining outside (which is constantly lately) he doesn't venture any further than the patio to do his business. He has absolutely ruined one of the front wheels on the barbecue pit from peeing on it until it's positively rusted through. I know what you're thinking, why would I allow this? I DIDN'T KNOW IT WAS HAPPENING UNTIL IT WAS TOO LATE. When we moved into this house Hunter had only ever lived in apartment complexes and I had to train him to be able to go to the bathroom without his leash on. I walked him outside and introduced him to the joys of marking the bushes and trees in our back yard. After I got him comfortable with it, I just let him outside when necessary and paid no mind to where he was doing his thing. I had no idea the little $#!^ was just letting loose on EVERYTHING on my back porch!

Just look at this literal son of a bitch. Don't tell me you don't want to cuddle the crap out of him. But don't you dare, unless he has met you and had you vetted via his apparently broken sniffer. If you reach down to pet his royal cuteness ESPECIALLY if you squeal in delight while doing so, expect to get your face chewed off suddenly and without remorse.


1. He's a cuddle monster who won't relinquish my heart.

The fact is I love this little jerk. He has crapped his way into my soul and I will never not love him. When he finally goes to doggy heaven I will undoubtedly be inconsolable, and will probably do something creepy like have him mummified and then bury him in a sarcophagus with all his toys and blankets and rawhides so anthropologists of the future will surmise he was worshiped as a god or something. He literally hugs me when I pick him up. He wraps his tiny paws around my neck and leans his little head on my shoulder and then sighs the cutest little snorty doggy sigh like he couldn't be any happier. My dog is a little shit. I want to hate him, but I can't. I'm going to keep loving his grumpy ass until death do us part. 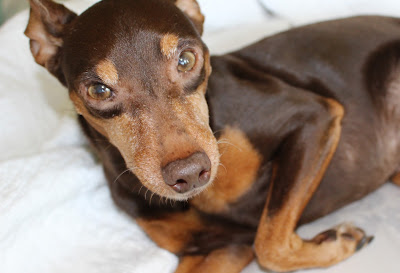 LizA
I was born and raised in Texas, I'm a Christian Conservative, yet independent of any party affiliations. I have 2 brothers and 2 sisters, I was married in 2007 and I had a daughter in July, 2009, and a second daughter in October 2012. I have a min-pin named Hunter who likes to bite ankles and I one day hope to be able to visit lots of exotic places like Galapagos and Antarctica. No, seriously.